Established 1869, Alnmouth is the fourth oldest golf club in England.

This is where it all began.

In August, 1869 Captain Arthur Walker, on behalf of a number of others, issued a notice to probable members about the forming of a golf club in Alnmouth. It is believed that the course in Alnmouth village was designed and created by Mungo Park, a youngish man at the time, who was to become a famous golf professional and the Club’s first professional.

The first Annual Meeting of the Club is recorded as taking place in October of the same year, according to the notice, a copy of which is held at the Club. 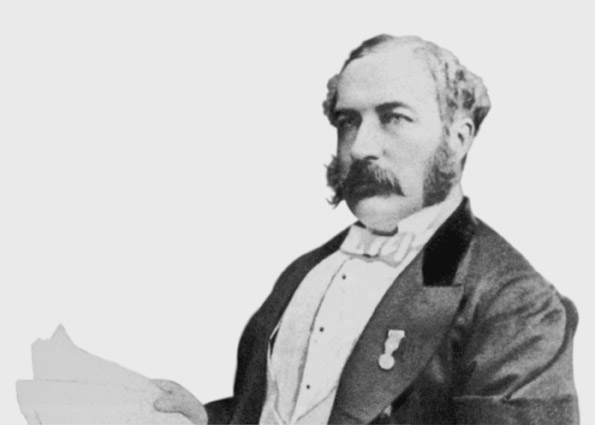 The first competition for the Percy Medal was played in the Autumn of 1869 on the 19th of October, resulting in a win for Captain Walker, the secretary, with a score of 81. The notice for the Autumn meeting also mentions a silver Challenge Cross, presented by a member of the Royal and Ancient Golf Club of St. Andrews, a Mr. Charles Walker.

The first winner of this medal was the Revd. A. Medd with a score of 119 strokes for 18 holes. There is no record, however, to say when this medal round was played. It may have been a second day’s competition at the October meeting or played for later in the year.

Further challenge prizes were given shortly after this. In 1870 Mr. A.H. Browne presented the Browne Cup to be followed by the Cadogan Medal from Mr. C.W. Cadogan. These were to be played for at the Spring meeting in 1870, starting with the Browne Cup which Mr. C.E. Riddell won with a score of 92. This particular meeting was celebrated in the evening with a fireworks display at which all the villagers were present. The following Spring the Cadogan Medal was played for as the first prize when Mr. Alexander Strath won it with a score of 79, and the Browne Cup became the second prize. The disparity between all these winning scratch scores must be of some academic interest! From what appears later in the records, it is presumed that members arranged matches between themselves on whatever terms they chose. Twice a year however, there were special gatherings for competitions – the Spring and Autumn meetings. While on the subject of the earlier trophies, the Wilson Snuff Box appeared in 1893 with the Tate Prize in 1906. From that date until the early thirties no other prizes were given for annual competition. All of these are still played for today.

In September 1881 a professional tournament was organised by the Club together with Mungo Park the professional/ greenkeeper. The Club provided prize money of £27, with £12 for the winner, £7, £5, £2, and £1 for the runners up. M. Ferguson won the event with a score of 160 for four rounds of nine holes. The Park family name dominated the players list:

Later, in 1887 there is reference to another professional tournament and doubtless there were many others. An annual publication, “The Golfing Annual and Club Directory” for 1887/88 published subscriptions of ten shillings and sixpence with a membership total of 160.

So, Alnmouth had now taken its place among the earliest courses and Clubs in England, sharing fourth place in this respect with Hoylake (Royal Liverpool), their predecessors being Blackheath -1608; Westward Ho (Royal North Devon) in 1864; and Royal Wimbledon in 1865. Moreover, Alnmouth played its part as one of the sponsors of the Amateur Championship. It was in 1885 that the Royal Liverpool Club (Hoylake) actually introduced the competition and Alnmouth with 23 other clubs controlled this event until the year 1919.

Ladies played golf at Alnmouth long before they formed their own club, as early as 1881, the Newcastle Daily Journal printed a note saying that the Alnmouth Ladies had made a request to the men’s club to play a horse shoe round on the links. The Alnmouth Ladies Golf Club was formed in 1907, they held their first committee meeting in July 1908 and the first Lady Captain was Mrs MacLean who was in office from 1908 to 1911.

In the late 1920’s the Duke of Northumberland was approached and consented to lease a further piece of land in order to make a new 18 hole course. A survey of the land was made by Mr HS Colt the famous golf architect and his report was published in the Newcastle Journal on the 4th July 1929. The land surrounded Foxton Hall, one of the historic residences of the Percy family, which was to be used as the clubhouse. The plans included using a portion of the building as a ‘Dormy House’ which is still in existence today.The adoption of the Foxton Hall scheme was reported on the 10th December 1929 with the new club to come into being on the 1st January 1930. The first membership subscription was 5 guineas, 4 guineas for ladies. In the early days the original 9 holes remained part of Alnmouth Golf Club and thus the club had two courses. The new course was opened on the 9 May 1931, but sadly the the 8th Duke of Northumberland died suddenly in August and was therefore not present to witness his vision. In 1936 Alnmouth Village Golf Club was formed and took over the running of the old links. Since that time the club’s have maintained their historical links and still play a number of special combined competitions, the most famous called ‘the upper and downer’ a match between the two clubs played on a combination course of the back nine holes at Foxton (the upper) and the nine holes of the old links (the downer).

From the book on the history of Alnmouth Golf Club called Golf at Alnmouth written by D.P. Walton published in 1992 and recently updated in 2004 by former Secretary Peter McIlroy.